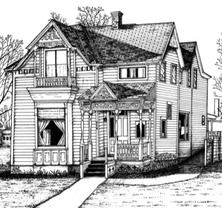 Waldemar Ager, along with his wife Gurolle, raised nine children in Eau Claire, WI. For many year, he served as the influential editor and publisher of The Reform, a Norwegian language weekly distributed throughout the Midwest. He also authored nine novels, many of which explored immigrant culture in the United States during the early 20th century. Ager was dedicated to the preservation of the Norwegian language and culture in the United States, and traveled throughout the nation to speaking in support of his passions. He was also a prohibitionist, another defining aspect of his life and works.

The Ager House was built ca. 1896 by local carpenter Brady Anderson and purchased by the Ager family in 1903. It would stay with the family until 1962. In 1962, Luther Hospital bought the house and its auxiliary group housed the Red Carpet resale shop in the house. Originally, the house was located at the Chestnut and Whipple streets, but moved to its current location in 1993 when Luther Hospital needed the space to expand. Support from Luther Hospital and the City of Eau Claire helped make the move possible, and dedicated volunteers carefully restored the house in the 1990s.

Learn more about renting the house for your event

Formed in 1993, the Association supports the communities we serve through several goals:

Learn more about us and read our newsletters

The restoration of the library was completed in June 2008. The library provides access to resources to a variety of books and other resources that explore Waldemar Ager and his works, significant Norwegian and Norwegian-American authors, Scandinavian history and culture, genealogy, and so much more. Click below to learn more about accessing and using this treasure of the Waldemar Ager Association.

Want to learn more or interested in joining our dedicated group of volunteers? Please contact us using the form below, we would love to hear from you!

Better yet, visit the house and meet us in person.

The Ager house is open regularly for visitors. Best of all, it is free to explore with docents available to guide you through the house and answer your questions.